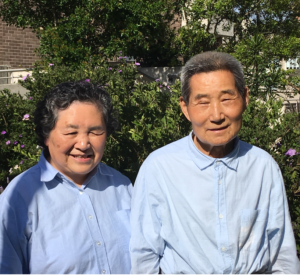 Learning a new language in her mid-sixties and ongoing study in her seventies did not daunt Linda Chen, who spoke Mandarin and Shangainese when she migrated to Australia from Shanghai  in 1995 with her husband, Yong li Su. Her grasp of English began when a visitor, arranged through SCS’ Community Visitors Scheme (CVS), began fortnightly visits (CVS matches volunteer visitors with people at risk of social isolation, details here). Within a few years, the CVS visitor became even more vital because Linda lost her sight. Outings became less frequent although Yong often takes her to shops, the library and Church for an English language group.  Her English is now excellent and much appreciated by many neighbours – the 50 or so Chinese households in Blandville Court which now rely on Linda as a translator.

“At first, I thought: English is a very difficult language, but my first CVS visitor, Margaret, was very, very patient,” she says. “Hunters Hill Community Services and now Sydney Community Services has given a lot of help to the Chinese people here.”

Always keen to make new friends and polish her English, Linda has enjoyed seeing CVS visitors for most of the last dozen years.  She encouraged Blandville Court residents to join her in an English conversation class which took off in 2012 and still meets most Friday mornings.

“Many neighbours said they can’t speak English well, so I asked Tina Liu, the Social Support Coordinator from SCS, to help. She organised a group and invited the teacher.”

A year after she embarked on the English conversation group, Linda started to learn computer, with help from NVDA – free software that  synthesises audio from on-screen information and  supports more than 20 languages.  Now she admits to spending about eight hours a day at her computer!  In 2014, Linda  went to Parramatta to do a Diploma of Business, and quickly followed this with a Diploma of Management. for Linda, the courses were ways to improve English and learn computer rather than start a business venture. Margaret, the fortnightly CVS visitor, read the course text books to Linda and answered queries about coursework but Linda did the rest.

“I used to practise on the computer till midnight,” she says. “In my life, the most important thing is language – it’s the tool for connecting with people. And the second most important is the computer – it gives me choice. It puts the whole world in front of me so I can know what’s happening in China, London, here or anywhere.”

Linda believes she might not have mastered English nor the computer without support from SCS and its CVS visitors. As she says, using a computer opens a whole world for someone who  uses her laptop for music, listening to audio books, news and public affairs, and keeping in touch with people.

“I feel more confident and independent at home and in the community because of my connections with SCS, which is a great help in my life.”

Linda is also involved with Blandville Court’s Chinese Community Group, for whom Tina Liu  organised a Chinese Seniors’ Day last month. They invited their most senior members – in their 90s – to share the wisdom of their lives. The gems of the day included ‘Don’t be angry’,  ‘Keep your hearts peaceful’, and ‘Don’t drink’. The day helped spawn a Chinese Healthy Leisure Group which immediately gained 42 members, who might do Tai Chi, play cards and mahjong, as a start.

“I encourage everybody to learn, especially the computer – I say, ‘it’s very helpful, gives you choices and can make you happy every day’.”