Whether working as a volunteer or socialising as a guest, David Walker is often at SCS’ Lane Cove Community Hub.  After volunteering at SCS about four years ago, David has taken up so many SCS social activities  that he might be more of a client of our services than a volunteer. 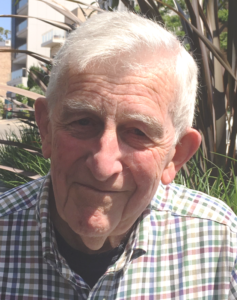 He originally contacted SCS offering to do gardening and meal deliveries but, at the time, catering had a greater need so he’s become a valued member of our volunteer kitchen team instead.  Meantime, he joined the mobile men’s group which goes out on Bus Outings for Older Men (BOOMers), comes to the Park View Room for the lunches SCS hosts fortnightly, regularly enjoys the monthly movie afternoon here, and comes on other monthly bus trips open to all over-55s (see SCS social activities here   ).

Tambourine Bay has been home for almost 60 years so David has many local friends and is always making more through the handful of SCS activities he’s taken up – and of course through volunteering.

“Volunteer work is just as social as the outings – the point is to be mixing with people,” says David.