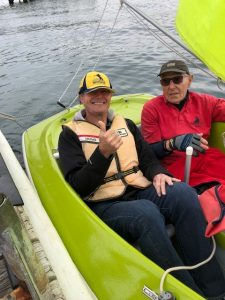 It’s just as well the Dorahy family are great travellers. It’s been a long journey of rehabilitation for Patrick Dorahy since 2015 when he had a heart attack which stopped oxygen to his brain long enough to threaten his life, cause brain damage and even have his life support turned off.  Thankfully, Patrick has come back from that insensible state and, after what must have been a near-vertical learning curve, continues to learn and hone skills through SCS group activities for people with a disAbility and his work at New Horizons in Ryde.

Originally from New South Wales, the Dorahys had just moved from Auckland, New Zealand to Montreal, Canada, for Patrick’s work.  Patrick, who has a degree in agricultural science, had just become Canada country manager for Zoetis, which develops and makes animal health medicines and vaccines for vets, livestock farmers and companion animal owners. The family, including wife Jane, Charlotte, 16, Henry 14, and Lily, 13, had only been in Canada two weeks when Patrick collapsed with a heart attack after all jogging together. Despite language barriers in French-speaking Montreal, Patrick’s children managed to grab a passerby who could perform CPR and worked like a champion until Patrick’s wife, Jane, who is a nurse, returned and took over pumping Patrick’s chest. Neither they nor the paramedics who arrived 20 minutes after the heart attack, could revive Patrick. Then, after a defibrillator was applied a third time, Patrick’s heart began beating again.

In hospital, Patrick was on a ventilator for two-and-a-half weeks while doctors assessed neurological damage. His breathing was helping drive the ventilator but there was no sign of brain activity so doctors advised that Patrick would not regain consciousness. The family faced the terrible decision about life support which they decided to turn off.  Yet the next day, the hospital rang to say Patrick had not only opened his eyes but he was sufficiently alert to watch nurses moving about his room!

Finally back in Australia three months later, a surgeon did a quadruple bypass and implanted an internal defibrillator. Then came the steep learning – or re-learning – curve. In an intense, two-year period at Greythwaite Rehabilitation Centre, Ryde, then at Royal Rehab in Putney, Patrick relearned to swallow, speak, move with balance, write a few essential things and even use an app or two.

These days his learning curve has slowed but every day Patrick is refining skills in speech, memory, socialising and independence including independent travel. His busy schedule starts with Sydney Community Services’ (SCS) Monday Social and Recreational Group which offers sailing days, exercise, art and musical sessions, and indoor and outdoor games including cricket and ten-pin bowling. For the last two years, Patrick has joined SCS’s Monday group of about a dozen people. Like SCS’s Friday group, it’s open to all adults with a disAbility (see more on SCS community engagement for people with disAbility here ). Having always been athletic, and a fan of beaches, Patrick especially likes sailing days with Sailability. He’s also keen on zoo visits with the Monday group.

“I really like guys in the group  … some are a bit older than me,” he says. “And (group coordinators) Helen,  Gaynor and Jenny are great. We go to different places –today we were at Picton today at the NSW Rail Museum.”

“My goals now are to maintain health and wellbeing and improve my independence and skills,” says Patrick, who doesn’t think he will return to being a workaholic company executive. Yet “he’s still a workaholic who loves working” puts in Jane – because Patrick works on all three days between his Monday group and outings with BOOMers every second Friday. Patrick works three days with New Horizons, which has been partnering with businesses to co-ordinate employment for people with a disAbility for 50 years.  This week at New Horizons, Patrick is packing showbags, which might challenge his dexterity a little but he’s up for it. 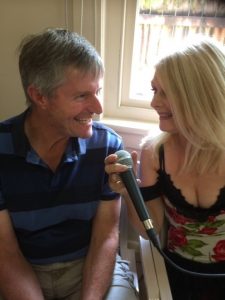 See more about our disability services for social engagement and participation here.