Colbeck on for young and old

Colbeck on for young and old

Re-elected PM Scott Morrison has shuffled the cabinet positions, removing  Ken Wyatt from his spot as Minister for Aged Care and Senior Australians.  With Sen. Wyatt’s new appointment as Minister for Indigenous Australians, indigenous people at long last have an indigenous representative. Taking over the Aged Care and Senior Australians portfolio is Tasmanian Senator,  Richard Colbeck, who is also covering the other end of our lives as Minister for Youth and also the Sport portfolios. Previously Assistant Minister for Agriculture and Water Resources, Senator Colbeck believes it’s an important time in aged care, especially with the ongoing Royal Commission.

“Virtually all families will have an experience with aged care in their lifetime. I am focused on ensuring our record funding enables senior Australians to age with dignity and receive the care they deserve. Mr Colbeck said his priorities include: 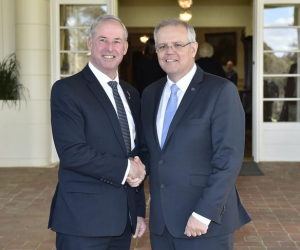 “Critical issues in aged care have already been exposed by the Royal Commission … which uncovered appalling evidence of aged care failure. It is time for all parties to commit to action and explain to voters their plans and resourcing for fixing the system. We urge him [Sen. Colbeck] to make the disgraceful shortage of home care packages a top priority,” said Mr Henschke.

Mr Colbeck began his parliamentary career in 2001, and has held a number of roles in assistant minister positions before losing his Senate seat in 2016 to return to the Senate in 2017 after the dual citizenship eligibility debacle worked in his favour.