“Many men have a rather solitary life outside their families and work,” says Adrian. “So retirement’s great – for about six months!” 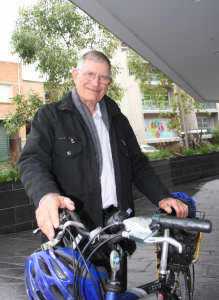 “One of the things I like about BOOMers is that we’re not sitting around, we’re actually doing things; we’re talking but we’re out and about.”

This mechanical and industrial engineer, who has worked in Belgium, Germany, Canada, New Zealand and the UK as well as Australia, retired about 16 years ago but hasn’t slowed down. He cycles to SCS at the Lane Cove Community Hub to meet the bus for BOOMers outings and generally prefers a bike – either bicycle or motorbike – to driving a car.    He takes off twice a year on his motorbike for a few weeks alone, sometimes even a couple of months on a long haul to Perth or Darwin where he loves the emptiness of the outback. Usually he heads for the coast, north in spring and south in late summer.

“I get a tremendous uplift from being out in open space, away from the hectic city, just enjoying the scenery and the quiet. You have more space and freedom on a bike, too, and see lots more if you don’t go too fast.”

Adrian rides a 300cc bike for manoeuvrability  and lightness – because if it accidentally lands on him, he won’t be stuck. Once when he was inspecting his tyres for thorns near Leeton, NSW, he ended up under the bike.

“If it had been a bigger bike, I would have been in trouble, stuck there under it, and alone.”

Meanwhile, Adrian’s wife babysits their sons’ three dogs while he’s travelling … she’s more than glad when he comes back in one piece.

Two groups of BOOMers get together twice monthly on Friday mornings to share interesting destinations, company and morning tea. Call 9427 6425 to find out more.