It’s another busy week for James Russell who works Mondays and Thursdays for Jigsaw, a document management service which pays award rates to people with the ability to digitise archives.  Today, James makes time to chat between data entry work and drama in the afternoon. Then, in the evening, it’s his favourite event, Social Club at the Chatswood Youth Centre. He’s even been known to consider holidays on the basis of what the Social Club has lined up! A Social Club member for eight years, James has also been stepping out with Exploring Sydney group on Wednesdays for a year. 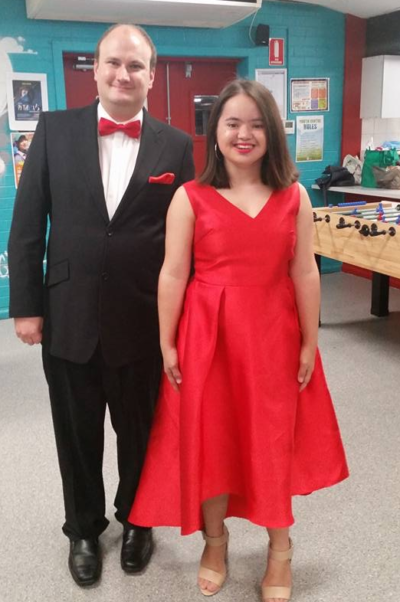 James and Olivia at the ‘royal wedding’ Social Club party

“I like all the music at Social Club, except jazz dance night which is too girly,” says James. He loves the games nights especially the coin toss “so I can win more prizes”.

Fancy dress parties are James’s favourite Social Club activity. Recent themes included  Bollywood and ‘royal wedding’ – when James won a prize for looking most elegant in black evening suit with maroon accessories. Olivia, also pictured, was the other prize winner.  Another night the Social Club group went to see the musical, ‘Strictly Ballroom’, at the concourse theatre in Chatswood, and they dressed on-theme (featured above: James at far left with Bridget, Jessica and Hane).

In Exploring Sydney’s mini-bus, James likes singing (with friends Janet, Belinda, Mattie, Danny and Jessica) almost as much as the destinations. His likes visiting places with games such as putt-putt golf as well as scenic destinations.

After Exploring Sydney on Wednesdays, James gets back to his apartment for a cooking session with Clare Ganly from SCS – one of many activities SCS can line up when clients’ interests can be matched with SCS staff skills. “I like cooking pasta and can take it to work the next day,” says James.

Read more about SCS activities for people with mild disability  here. If you’d like to join Social Club or Exploring Sydney group, or find out about other services, please call Disability Services Coordinator, Clare Ganly, on 9247 6425.