Originally qualified as a registered nurse in the UK, Annette Allen came to Australia via New Zealand  where she specialised in aged care and infection control.  She started a family – now four children – and so took nine years at home away from her career. 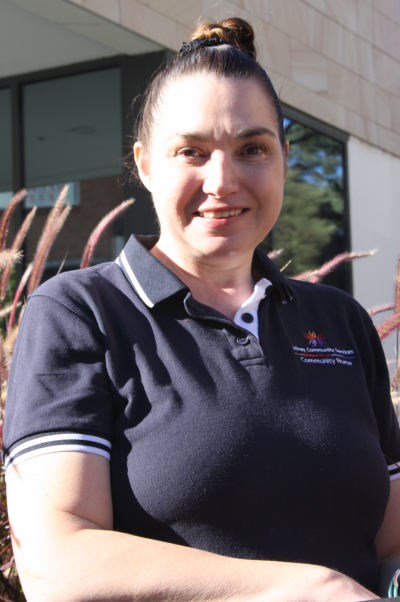 When it was time to get back to nursing, she looked for a job local to home in Lane Cove and one that fitted with school hours – so the early starts and finishes of the SCS community nursing team were a neat fit.

“This is the first job where I’ve been out and about going to people rather than the other way around. I’m enjoying getting to know the local community through nursing in people’s homes,” said Annette, who has worked in major hospitals, and nursing homes, sometimes specialising in cardiac patients, at other times in infection, occupational health and safety, and now with SCS clients, specialising in wound care.

Annette joined SCS as one of the nursing team a year ago but now shares role of Manager, Nursing Services with Michele Neil who has worked with SCS for many years. They now each work three days a week with a detailed ‘handover’ day on Wednesdays.

“I like the autonomy, planning the day and using my judgement on what needs to be done. And I enjoy practising things I’ve been trained in which are not so common in hospitals as they are in community nursing.”

Behind the autonomy of a community nurse’s schedule is a collaborative approach to wholistic care. As much as possible, managers try to roster the same nurses to see the same clients but it’s not always possible. So the nursing team has a weekly case conference where all nurses discuss aspects of a client’s health and get eachothers’ perspectives.

“You have to look at the whole picture: the client might be  the husband in a couple yet we might have a concern for the wife, or might need to call their family about changes we’ve noticed or get advice from the SCS Community Care Advisor about other support that could be helpful.”

“I don’t think I’ve ever worked with such a supportive team with such great communication; they are wonderful bunch of nurses, and Michele has a lifetime’s experience in nursing – I love working with them.”      Find out more about SCS home nursing services here