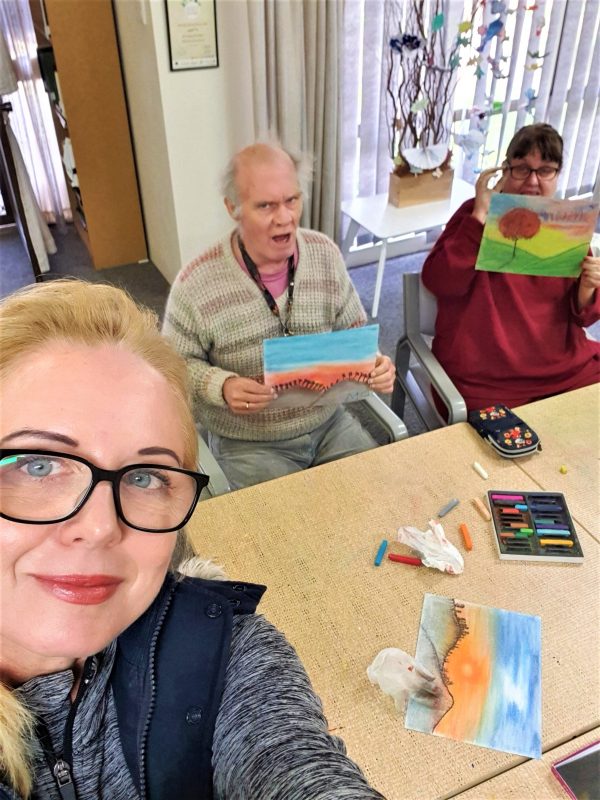 Art teacher and social support staff, Margareta Odlin in the foreground with students and their work

Experience from courses of study, varied past roles, and well honed skills are all drawn on by Margareta Odlin in her role as art teacher and social support staffer with Sydney Community Services.

“Just about everything I’ve learned in life I can apply in this job,” she says. “Visual art skills, communication and empathy, fitness and even cooking – because I often cook dinner for a client.”

Margareta was born in Poland and used to run a restaurant with her mother in Stockholm, Sweden, before gaining a visual arts degree there. She worked as a graphic artist in Europe and then in Australia with a publisher and managing the art department for Dick Smith Electronics before taking a course in life coaching, and making a business of it. She coaches ‘life’ clients one day a week.

Four years ago, Margareta came to SCS as a student placement component of her TAFE course in Community Services. Now she makes the most of her experience as an artist giving art expression classes to SCS social support clients living in social housing at 184A Pittwater Road Gladesville. These mid-week classes were run in groups until the virus arrived and now she gives two sessions a day for individuals or a couple.

On Mondays and Fridays, she gives individual social support to a client who has difficulty walking and is often in a wheelchair. They sometimes join a group of SCS clients with acquired brain injury when the weather smiles and the group can meet outdoors.  She thanks her good fitness levels for enabling her to pack her client’s wheelchair into a car and generally support his mobility when he doesn’t want to use wheels.

“He’s highly intelligent, has a good sense of humour and we get along well. We go on outings, do exercise together, I cook a meal for him – we try to do whatever he would like to do,” she says.

When Margareta first joined SCS she did more individual social support work. She started running the art expression classes several years ago, and the results for clients and for Margareta, too, have been remarkable.

“People with mental health issues are beautiful and it is great to see the difference an art session makes to people: often they are so much more alive when they leave the art session than when they arrived,” she says. “There’s times clients have thanked me at the end of a session for helping them ‘park’ their issues. They might say they were feeling dark and down and that the art session has ‘made their day’, which is the greatest compliment, and reward, really, for me too.”

Margareta loves it when her students get excited about what they’re creating and get “into the zone” – sometimes their excitement makes tears spring to her eyes! Yet she’s aware of her different hats and very careful not to infuse her art sessions with any life coaching.

“I am a support person for the art expression class. I give them a few ideas, some structure, materials for the class and encouragement and try to be flexible with what they might want to do. I like give people autonomy and respect.”

Last week, a family anniversary made one client feel down and the class Margareta had planned was about childhood memories.

“He didn’t think he was up for that so he and I did origami instead. He later thanked me because it took his mind off the anniversary and he went home happy and motivated.”

English is Margareta’s third language after Polish and Swedish – perhaps if SCS attracts some Polish or Swedish clients, she could apply her language skills as well!

More detail on SCS’ community engagement programs for people with a disAbility here.