If it’s about movies, our monthly movie presenter and volunteer, Alan Seale, invariably knows it. Alan’s been studying films for 20 years, no less, with a more famous film critic, David Stratton, who delivers an incredibly popular evening course on the history of world cinema (1894-1970) at Sydney Uni. Alan and other insatiable film buffs have attended the course year after year because David keeps revising it as more films and other material become available. 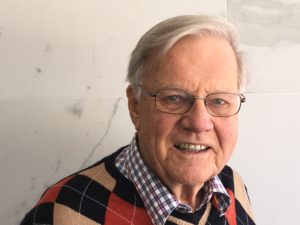 At SCS’ monthly Wednesday afternoon movie in the Lane Cove Community Hub, Alan shows his audience the hits of the ‘40s, ‘50s, and ‘60s – titles his audience knows and loves.

‘People say the films are a trip down memory lane,” says Alan, ‘And they just want to enjoy the movie and see it on a bigger screen than at home.’

Alan has built up a collection of about 400 DVDs – so there’s quite a selection. His choice of films attracts an audience of 20 or more people each month, including regulars who now know each other and enjoy socialising over afternoon tea after the show.

Alan has volunteered to run monthly movies for SCS for a few years now. And for 8 years, he’s generously found time each fortnight to deliver fresh linen and make beds for clients. At one stage he drove the community bus too. He still enjoys working with a partner on the linen service because he has come to know clients and looks forward to catching up with them.

“It’s great to see clients being so pleased we’re turning up. Once a friendly couple even arranged for their son to be there to meet us, just to introduce us to him – and they put on a lovely morning tea.”

As Alan says, social connection is a “two-way street”.