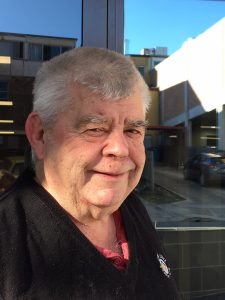 Denis Morris has been helping people out one way or another since the early 1980s.  After the army he became a taxi driver and was still driving cabs when he became a director of Lane Cove Golf Club in the early 1980s and, with others, helped “turn the club around”.  He kept working voluntarily for the club for about a decade and later spent his weekends looking after his mother, sharing care with his sister.

He’s had many volunteer roles: as a driver for SCS clients who need transport to medical appointments and has also worked on our linen service which delivers fresh towels and makes up beds with fresh linen. Denis later joined volunteers at the Mater Hospital delivering newspapers to patients. He has won awards from Rotary and the Federal Government for volunteer work and says when people tell him he’s “good to be helping others”, they’re wrong.

“I’m helping myself, really, because helping others is so rewarding – it’s life. I don’t know what I‘d do without volunteer work. It creates friendships and you can become a part of people’s lives.”

Later, in 2008, Denis became involved with the Lane Cove Conference of St Vincent de Paul Society, visiting people to see what they needed and how Vinnies can help or refer them to some other organisation which can help.

“When people who you’ve often helped in the past stop calling you for help – then you know you’ve achieved something, because they’re back on their feet,” he says.

Denis knows and greets many on the streets and bumps into others “on purpose”, while others have been unofficially “adopted”. He continues doing meals deliveries for SCS clients and working as a ‘go-between’ for St Vincent de Paul Society and, as a result, feels connected with his neighbours at all levels of the community.

“I know so many people around Lane Cove … When you get involved with these organisations, you make good connections with so many people and get access to all sorts of people.  I know all the local councillors and I’ve become a sort of go-between for helping people.”

If you have a little spare time and want to get involved with your community, SCS  has volunteering opportunities across a range of services including gardening, meals deliveries, social support, community transport, disability support, linen service, and Community Visitors Scheme. Most services operate weekday mornings. To find out more, ring our volunteer coordinator on 9427 6425 or email yhughes@sydneycs.org     or see our website