Elizabeth Carroll comes from a community-minded family, and a fascinating, community-oriented career. Now retired, Elizabeth prioritises her immediate neighbours in the Vasey Housing village where she lives at Hunters Hill, and also the wider Ryde-Hunters Hill community where she delivers meals as a Sydney Community Services volunteer. 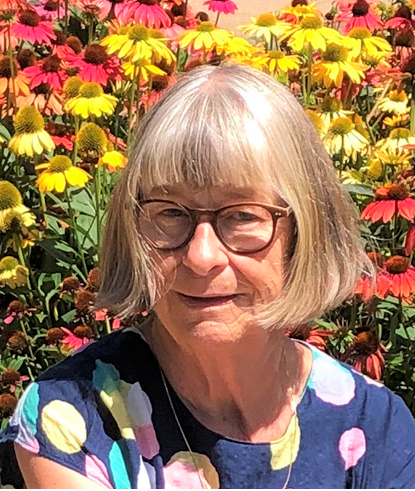 Elizabeth worked for the Reservations Team at Air New Zealand and became its supervisor, then programmed its computers so airline systems could ‘talk’ to each other (before the ‘code-sharing’ used by airlines today). Next, she worked for the City of Sydney as the Lord Mayor’s Personal Assistant in the lead-up to the Sydney 2000 Olympics. She then worked for the NSW State Parliament as a Ministerial Staffer and believes she was lucky to work for both Labor and Liberal-National governments because it afforded a good perspective on democracy in action.

“The run-up to the Sydney Olympics was a great time to be in that sort of position – you actually saw things getting done,” Elizabeth says.

Before retiring, Elizabeth joined her mother at Wurley Court, a Vasey Housing Retirement Village at Hunters Hill.    These days she enjoys art classes with Lane Cove Art Gallery and at Georges Heights (Middle Head) as well as volunteering to deliver meals for Sydney Community Services.  With art classes cancelled due to the restrictions around corona virus, she has more time for volunteering. So, as well as taking SCS’ home-delivered meals to clients around Ryde, Hunters Hill and Gladesville, she’s helped us with one of our Seniors’ Month events – the Bush Dance at Hunter’s Hill.

“The Seniors’ Month Bush Dance at Hunters Hill Town Hall was absolutely fabulous.  Around 100 senior citizens attended the morning tea and were entertained by In Line Boots – what a great group of dancers.  The more agile seniors and even some with walkers, and others helped by their carers, all joined in boot-scooting. It was great to see everybody enjoying themselves,” says Elizabeth.

At Vasey Housing Retirement Village, Elizabeth and neighbours who have cars, help others with shopping and odd jobs during the Covid-19 lockdown, especially some residents who’ve returned from overseas and have been in strict isolation.

“Everyone at Vasey knows each other, sticks together, and looks after each other – we’re a little community. That’s what I think volunteering is about – being an active part of the community, feeling that extra connection. My family has done a lot of volunteering: we understood social justice and the need to help each other.

“When my mother became tired of cooking and had meals delivered, the people bringing them were always so cheery and it was such a help to people who wanted to stay living in their homes. So I always said I’d deliver meals at some stage.”

Now that she is doing the deliveries, Elizabeth enjoys the connection and making clients happy.

“People receiving meals are appreciative and delightful. Before Covid 19 hit, I’d often help a little more if they asked; maybe go into the house, heat the meal for them and chat.  People have had very interesting lives and talking is part of understanding isolation, caring about someone and letting them know they have worth. I don’t like to think older people feel left behind – and some people are blessed with loving families and others aren’t.”

Elizabeth chooses to do Monday meals deliveries because it gives her a structured start to the week and, if she has more time that week, she can offer to do more. She believes volunteering builds up a sense of community in herself and with others, too.  She relishes the satisfaction of knowing she’s contributed and loves the extra connection volunteers have with others and with the community generally.

See more about our home-delivered meals service here, where there is a new main and petite meals menu.