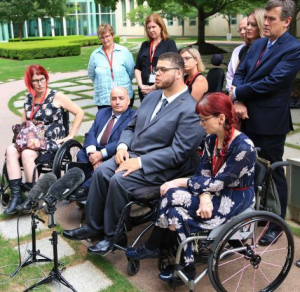 The Federal Government last month was poised to announce details of a disability sector inquiry, which PM Scott Morrison has said should be of  “a similar size and standing” to the $370-million, five-year child sexual abuse inquiry.

Despite passing a motion for a royal commission into abuse in the sector, the government is yet to set any dates or details – although Morrison said he aims for it to start before the May election.

The go-ahead for the enquiry has been stalled by Coalition funding questions, and Morrison has come under fire for delaying the detail. The Coalition has argued an inquiry needs support from  States because disability services were under State auspices before the NDIS was set up. Morrison has written to premiers asking for ideas on the commission itself and on cost-sharing arrangements.

New South Wales, Victoria, South Australia, Queensland and Tasmania officially support an enquiry but Morrison has said he will not announce anything further until he hears from other leaders.  Greens Senator, Jordon Steele-John who pushed for the enquiry since his arrival in the Senate in 2017 and in February ratcheted up the pressure, says the Federal Government should take responsibility and fully fund the inquiry.

“It’s … ridiculous the Prime Minister is looking for money from the states. This is the usual shifting of the burden [that] people with disabilities face every day from government,” says Steele-John.

Therese Sands, co-CEO of People with Disability Australia and director of Disabled People’s Organisations Australia, speaks for many when she says the sector should not have to wait.

“Previous royal commissions have not had to wait for other levels of government to agree to funding, so neither should we,” she says, calling on all governments to provide necessary support and resourcing for the enquiry so people with disability can get the “overdue justice for the violence, abuse and neglect we experience”.