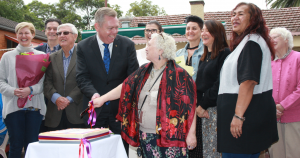 It was like a makeover on reality TV, quipped Member for Lane Cove Anthony Roberts when he re-opened the SCS Community Hub at Hunters Hill, formerly known as SCS Seniors Hub. The renovated Hub now gives seniors and people with disAbilities a vastly improved environment for activities, meetings, and skills training.

The refurbishment was funded by just under $20,000 from NSW State Government which was topped up by Sydney Community Services (SCS) funds plus about 200 hours of free labour in stripping, cleaning, filling and painting by SCS staff, family, friends and other generous volunteers. 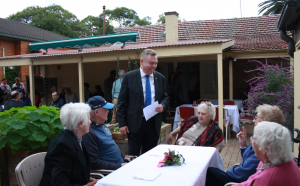 “I remember what this place was like,” said Mr Roberts in his speech to the crowd gathered in the Hub’s cottage-garden courtyard. “And, to be honest, it was very functional but a little depressing. But when I walked in today and saw what you could do with $20,000, I’m amazed by the ‘before’ and ‘after’ … it’s like a TV makeover.”

“I might have to borrow some of your expertise to get maximum result for minimum investment on a few government projects,” said Mr Roberts, also Minister for Corrective Services and Counter-terrorism.

The project was managed by Catherine Morton, Community Visiting Coordinator, supported by Service Coordinators Gaynor Starkey, Alice Cheng, Christina Ho and Melodie Pike. During the two weeks of refurbishment, the Hub managed to keep running its many programs for seniors and people with a disAbility by begging, borrowing and hiring spaces in other local venues. The Hub runs centre-based services and skills training for seniors and people with disAbilities. Several groups of seniors including Chinese, dementia, men’s, and women’s groups come to the Hub on specific days for programs of activities and outings. Also disAbility groups of younger people meet for activities at the Hub before being taken on outings every Monday and Friday.

“Community is our greatest asset, so this will become an all-inclusive space, for everyone, no matter their background or needs. As such, I officially rename what was known as the ‘Seniors Hub’ as the ‘Community Hub’.  After all, we deliver more than 14,000 hours of services from this hub to a diverse group of people.”

For information on any Community Hub services, please call  9427 6425.