Walking with the stars – of the NRL

Walking with the stars – of the NRL 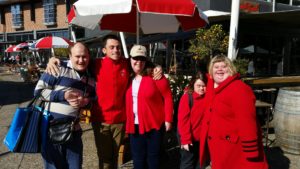 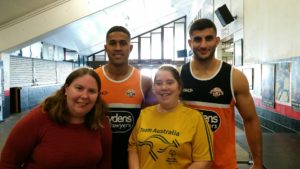 Young people in two busy social groups for people with a mild disability look forward to meeting each week, catching up on each other’s news, as well as their next destination – and  then seeing it all on the SCS Facebook page later. Disability Support Worker Clare Ganly who coordinates Walking Group (Mondays) and Exploring Sydney Group (Wednesdays), says they know how to make the most of a day out.

Exploring Sydney group – James Russell, Janet Munro, Belinda Sewell, Dan Stanwix and Jessica Beckman – get around in one of the SCS vans, which gives them a wide choice of destinations. Their much-loved volunteer driver Mick (one of the family), has taken them out to places on Sydney’s edge such as Windsor and Brooklyn. They like places which offer an activity so they often visit museums, gardens, wildlife parks, or have a game of putt-putt golf. And their comfy air-conditioned van has room for a few more people – if you’d like to join in, see details at  https://bit.ly/2zS5gRu

Walking group – Brigette Cook, Jessica Beckman, Nicole Waltz and Richard Harriman – has plenty of ideas for their next destination and usually decide upon it together over lunch. At this time of year, the Walking Group has footie-fever!

So to spice things up, they have visited various rugby league clubs and training ovals, hoping to catch a team at training. And they have been lucky!  In the last couple of months alone, the Walking Group has met members of Canterbury Bulldogs, Wests Tigers and Manly Sea Eagles.  Last season, they met the Souths Rabbitohs and Eastern Suburbs Roosters. 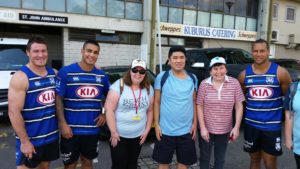 “We pick teams whose training grounds are easy to reach by public transport; I do the homework and off we go,” says Clare. “And we’ve been very lucky to arrive while teams are training; and we’ve found players are very happy to chat and pose for photos with us.” 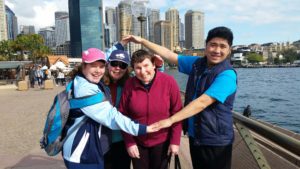 When not stalking footie players, the Walking Group goes for variety – lately having looked in at Sydney Fish Markets, Sydney Opera House and Botanic Gardens, and Parramatta. The enjoyment factor is high in this group that shares laughs en route while their Fitbits calculate the exercise factor.