The sun shone on early arrivals to the Hunters Hill Food and Wine Festival on Sunday morning, May 5, 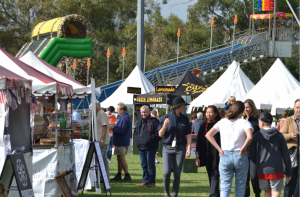 and they were soon wandering Boronia Park Oval and busily sampling stalls, music and more. Families flocked to the action-packed rides ‘alley’ and shopped for gifts or something to nibble on while having a drink from 15 fine food providores. Others satisfied more serious hunger with specialities from another 16 restaurants.

Wine lovers got down to business tasting bottles from famous wineries such as Petersons Wines, Pepper Tree Wines, Brown Brothers and Hungerford Hill and many newer names such as Elbourne Wines, Iron Gate Estate, Saddlers Creek Wine and Stonehurst Cedar Creek, which has an organic range. 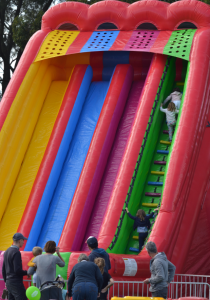 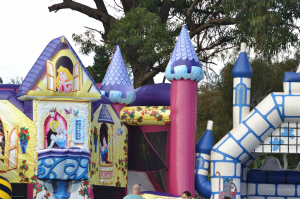 Considering rain had been predicted well ahead of the day, the as-yet-uncounted attendance was impressive although not as high as last year’s 9,000-strong crowd. When rain did come, there was plenty of cover in the stand and under a big marquee in front of the stage from where music rang out all day, ranging from upbeat ballads to rock.  The crowed thinned because of the rain but most, obviously enjoying themselves, stayed for a generally sunny afternoon.

Regardless of the weather, talented young local, Jordan Richards, and bands If Not Now, Piper Street, and The Mummas & Co Community Choir,  held an audience happily under the marquee all day. 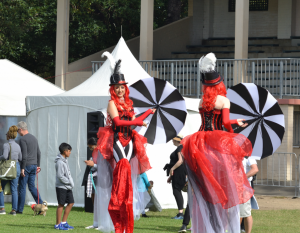 Festival organisers and SCS are grateful that many of these wine and food providores were generous suppliers of delicious hampers which were raffled at the end of the day. Eighteen prizes were drawn by Len Wallis of Len Wallis Audio in Lane Cove who donated a fabulous top-of-the-line television as first prize won by Peter Fay. The second prize was $3,000 in travel from Trendsetter Travel and Cruise Centre won by Jennifer Rodda, and third was a $500 collection of cosmetics from Estee Lauder,  won by Laura Hay. Fourth prize, a picknicker’s delight hamper of gourmet food, wine and a magnificent hand-quilted rug crafted by The Hunters Hill Quilters, was won by Stephen Gardiner. Fifth prize, a selected wine-lover’s dozen from Fesq & Company wines  was won by Kieran Long. Next drawn was a ‘night in’ hamper  of sparkling wines and gourmet chocolates to be cosily consumed under a lovely quilt by The Hunters Hill Quilters – by winner ‘Ferguson’.

The seventh lucky winner was Gaynor Starkey who won dinner with friends at  The Hills Middle Eastern Restaurant. 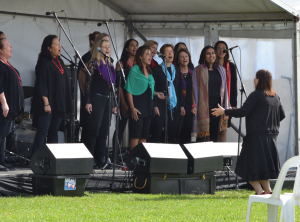 More dining experiences were drawn – dinner at the Alcott restaurant, was won by Max Hitchins, while Vivienne Skinner won a dinner for two at La Piazza. The tenth prizewinner, Christy Pritchard won an ‘indulgence’ hamper of pamper products, gourmet treats and wine. And yet there were another eight winners of wine hampers, courtesy of the stallholders of the day, which went to  Diane (surname not supplied), Brad Hughes, Robyn Hawes, Nebil Kashro, Kate Gardiner, Tony Saunders, M. Horne … and Caroline Mason was the lucky last drawn. 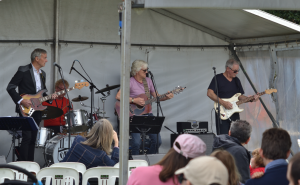 Proceeds of the raffle go to SCS which helps seniors and disabled stay independent at home. Festival  proceeds go to SCS and other community organisations such as the local SES, St Johns Ambulance and the fire brigade.