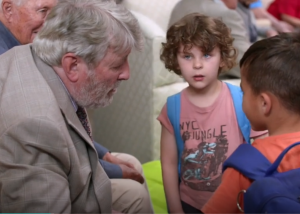 At first many residents at Anzac Village aged care home are reluctant to get involved with activities and antics of four-year-olds who are visiting them in a ‘social experiment’ documented by ABC TV. 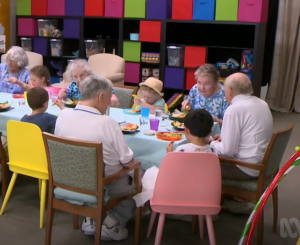 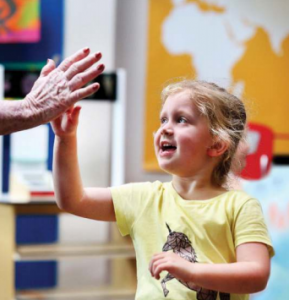 However, four-year-olds have infectious energy and such winning ways that even the most recalcitrant get caught up in the activities.

The ABC series, “Old People’s Home for Four-year-olds”, shows how most residents come out of their shell, make favourite friends, get out of their armchairs and move more, laugh and generally enjoy themselves more than before the little people visited.  Their interactions and activities are not lost on Anzac Village staff and the TV series’ experts who are observing behind the scenes and noting the differences in motivation, energy levels and mood. Why does this work? One reason is that the very young don’t treat older people as different – they just expect them to join in the set activities which, by design are within the residents’ capabilities, although it’s a push for many. 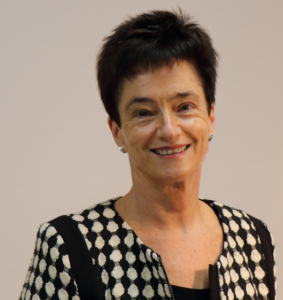 Steering the documentary series is a team of experts in geriatric wellbeing and early childhood who scientifically analyse and monitor the progress of both groups during the series. They track measurable physical and mental changes of the older group, and the developmental growth of the children. One of the series’ experts, Professor in Geriatric Medicine, Sue Kurrle, says Australia needs evidence that intergenerational care can work in this country in order to make positive change for people in aged care here.

“We hope our experiment will give that evidence and allow it to be adopted much more widely. Older people were young once and hopefully seeing these four-year-olds will really draw them out of themselves. Get them singing and laughing and dancing again as they would’ve when they were younger, bringing them back into life again.”

In Australia to date, intergenerational groups have grown simply through word of mouth and community collaborations. Another partner in the TV series is Ageless Play, an organisation that offers opportunities for young and young at heart to come together to play. Sessions are delivered in aged care, retirement living and early learning centres so parents, residents, and children under five can meet and play together.

Griffith’s project focused on two models of intergenerational care in six organisations in NSW and Southeast Queensland. One model is where an aged-care centre and childcare centre are on the same property, and another where one group visits the other. Early indications from the economic evaluation show there would be minimal financial impact on either organisation and, in fact, there were opportunities for cost savings through more efficient use of shared resources.  Let’s hope Richard Colbeck, the Minister for Aged Care and Senior Australians (also Youth and Sport) is tuning in.

“The impact of this research has been profound. Since beginning this project in 2017, the interest in intergenerational programs has grown immensely and there’s a groundswell, building momentum within childcare and aged care sectors, and among the general community.

The  ABC program, Old People’s Home for four-year-olds, began at the end of August but you can watch it  here  or on ABC’s iview platform on television

If you’re an individual or organisation interested in getting involved in intergenerational play, see https://www.agelessplay.com.au/